This woman wears a collar showing she was a member of the Independent Order of Good Templars (I.O.G.T.), a temperance organization that believed in total abstinence from alcohol. Founders formed the I.O.G.T. in 1850, when it branched off from the Knights of Jericho, an all-male temperance group based in Utica, New York. The Good Templars admitted women because they believed female members would “increase the power of this order for good.” The sitter’s membership in the group was important enough to her that she chose to be formally photographed in her fraternal collar. For further information, see blog post, December 30, 2010 http://nationalheritagemuseum.typepad.com/library_and_archives/2010/12/happy-new-year.html 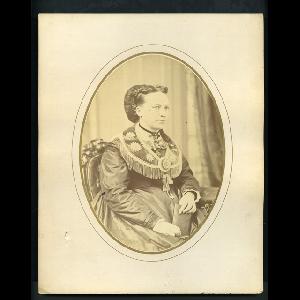