Sepia-tone photograph of unidentified man in Odd Fellows Patriarchs Militant uniform. The image shows a half-length portrait of a man, facing right, with beard. He wears a chapeau-de-bras and uniform with belt and sash. One Odd Fellows jewel, one IOOF badge (marked souvenir, Centennial) , and one pin are pinned on to his proper left breast. An IOOF ribbon badge (Representative, IOOF Grand Lodge of Iowa) is pinned on his proper right breast . The photograph is mounted on board; across center.

Marchers wearing ribbons on clothing and hats at processions to identify them as members of a group is long-standing tradition. Often printed on silk and pinned to garments, ribbons worn at processions were intended to be used just once or only a handful of times. Event organizers used ribbon badges of different colors and designs to distinguish members of a group and sometimes to signify a wearer’s role—such as a guest at or organizer of a meeting. Ribbon badges also served as souvenirs of special occasions. The Independent Order of Odd Fellows member portrayed in this photograph, dressed in Patriarchs Militant regalia, wears a ribbon that declares his status as a representative of the I.O.O.F. Grand Lodge of Iowa, letting others know his role even if they did not know him personally. 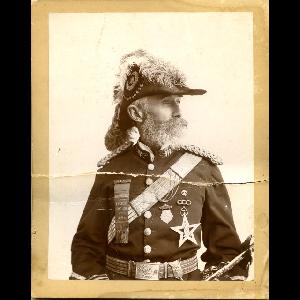