This unidentified member of the Grand United Order of Odd Fellows wears a top hat and collar with a rosette and the initials “P.N.G.” This regalia indicates that he had formerly been head of a lodge, called a Noble Grand. After his term, he earned the title Past Noble Grand. Founded in 1843 in New York City, the Grand United Order of Odd Fellows is an African American fraternal group that traces its roots to the G.U.O.O.F. in England. For further information, see blog post, May 1, 2020, https://nationalheritagemuseum.typepad.com/library_and_archives/2020/05/crayon-enlargements-the-original-digitally-enhanced-photos.html 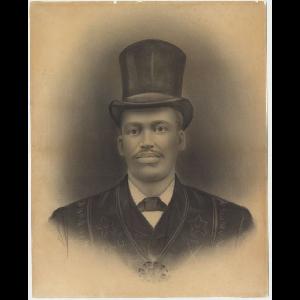