In this photograph, thirteen members of the Grand United Order of Odd Fellows, an African American fraternal group, pose in their regalia outside of the front entrance of the Brockton, Massachusetts, City Hall (erected between 1892 and 1894). James R. Thompson (1862–1931), one of the men pictured and the likely owner of this image, lived in Assinippi (later Norwell), Massachusetts, worked as a laborer, and is thought to have belonged to the Grand United Order of Odd Fellows’ Edward E. Bennett Lodge No. 3338 in Brockton. Edward E. Bennett Lodge No. 3338 was chartered on November 13, 1890. Seven years after E. E. Bennett Lodge was formed, the Grand United Order of Odd Fellows held its District Grand Lodge convention in Brockton. The two-day session, held on September 8th and 9th of 1897, brought together delegates from about 30 lodges for a business meeting and luncheon on the first day; on the second day, the group staged a parade and a ball. One thousand men were expected to participate in the parade. 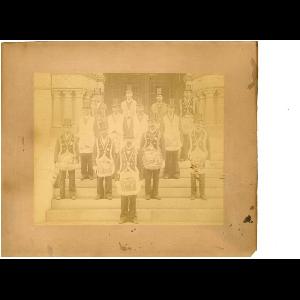