A Worshipful Master certificate issued by Baalbec Lodge (East Boston, Massachusetts) to Edward G. Graves and dated November 5, 1895. The engraving for the certificate was created by John Hawksworth. At the top of the certificate rests the Eye of Providence, which illuminates three figures, a heavily bearded man, who wears a lion skin while he clutches a key in his right hand, and two women. The first woman (standing) hands a document with the words, “Words is the principle thing &c,” to the second woman (kneeling). The three figures stand on an altar or platform and at their feet lay Masonic tools. The altar or platform is adorned with Masonic images, including one of a child who rests with a lion and lamb. A dove with a twig in its beak flies overhead. 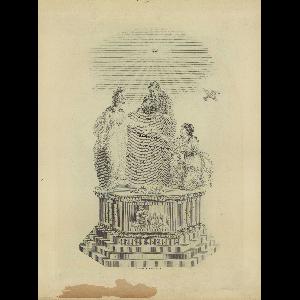