Clear pressed glass oval platter with scalloped edge. Leafy laurel wreath along the edge. Lettering on the side reads, "It Is God's Way / His Will Be Done." The bottom of the platter shows a full-length portrait of a man wearing an overcoat and holding a scroll (William McKinley (1843-1901)). Lettering at the sides of the portrait reads, "Born 1843 / Died 1901." 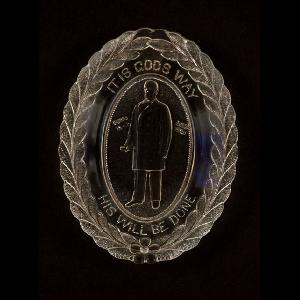