Color stereocard photograph of President McKinley's tomb. Image of white stone building, covered in ivy, with a soldier standing in front of a tomb. A flag hangs above the door. Beneath image in blue is "Tomb of Late President McKinley, Canton, Ohio." Back of card is blank. 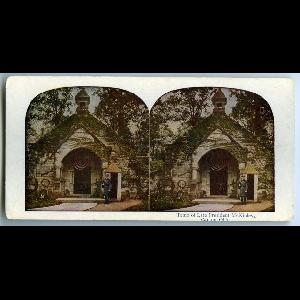