Black and white stereocard photograph with funeral portrait of President William McKinley. Portrait is surrounded by flowers and the American flag. Engraved on each side are the words "The Universal Photo Art Co. C.H. Graves Publisher, Phila. U.S.A." and "Philadelphia, Naperville, Ill. London. Paris. Germany." Beneath the second image in black print reads "Our Martyred President, William McKinley. Copyright 1901, C.H. Graves." At the top in the center between the two images is an engraved design. The back is blank with pencil writing in upper right hand corner - a cirlced four and "8 00." 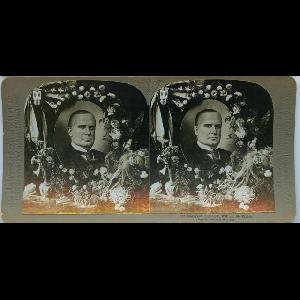