In 1908, Republican William H. Taft (1857-1930) was a reluctant campaigner, calling the period between his nomination and his election "the most uncomfortable four months of my life." The cartoon on this handkerchief gave a positive spin to Taft's obesity, suggesting that it took a big man for the big job of U.S. president. 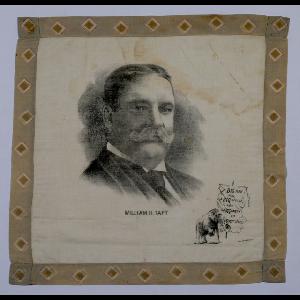