Black-and-white stereocard of Morehouse's Comet mounted on gray board. The text printed in black on the front of the card reads: "T600 / * / Keystone View Company / Manufacturers Publishers / Copyrighted / Made In U.S.A. / Meadville, Pa., New York, N.Y., / Chicago, Ill., London, England. / 16645 Morehouse's Comet, Yerkes Observatory." Printed in black on the back is the title "MOREHOUSE'S COMET," followed by four paragraphs of explanatory text, and the words "Copyright by Keystone View Company."

Morehouse's Comet was discovered in 1908 by Daniel Walter Morehouse, and was observed by other astronomers between September 1908 and May 1909. During this time, scientists at Yerkes Observatory made the first spectroscopic studies of a comet's tail. Yerkes Observatory is located on Geneva Lake in Williams Bay, Wisconsin, and is owned by the University of Chicago. It was built in 1897. 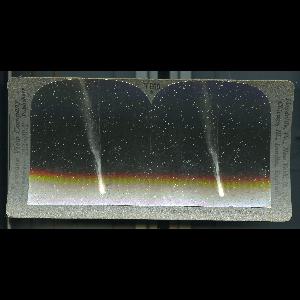 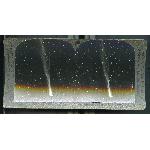 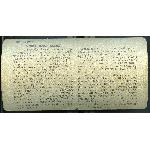