Masonic Boston Pavement or Tile bedcovering. Foundation pieced by machine with hand applique; tied. Composed of 100 blocks that are 8 1/2" square. Back to front binding; no batting. Backing is made up of five pieces of a light blue and brown printed cotton. While most of the blocks show abstract arrangements of shapes, two of the central blocks show the Masonic square and compasses symbol, surrounded by Masonic tools (gavel, pickaxe, straightedge, ashlar and shovel). Another block shows a bird in a tree, one shows a bird, and one shows an archway.

The unknown maker of this quilt united the fad for crazy quilts with applique on a white background, a technique that was not commonly used in crazy quilts. In assembling this impressive variety of patterns and colors, she mixed brand-new fabrics and decades-old scraps. Made for show rather than use, this bedcover was neither quilted nor filled with a batting. Along with her crazy quilt-style blocks, the maker featured stylized birds and several symbols used in Freemasonry: a square (an emblem of virtue); compasses (a symbol of keeping control of one's passions); a chisel (a symbol of the polishing effect of education); an arch; a mallet; and a maul. Bedcoverings of this technique sometimes bear names such as "Boston Pavement" or "The Streets of Boston," suggesting that the shattered look of the applique pieces represented the cracked pavement or cobblestones of city byways. 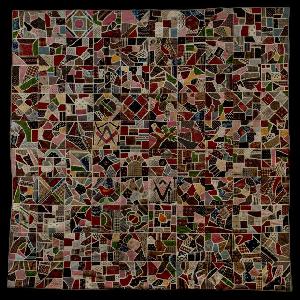 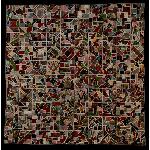 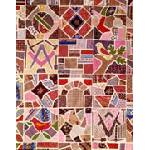