Four flap home-made canvas bag; khaki color; 48 star American flag stitched by hand on outside; small compartments within, closed by silver metal snaps. 4 brown buttons sew inside of one flap. Pouches inside sewn in place by hand using blanket stitch. Two ties on short flaps to tie flaps together. Two short loops for hanging pouch (from belt?) on either side of short flap.

During World War I, many soldiers carried small bags or kits to hold personal items. Anything from thread, needles and buttons—used for uniform repair—to shaving tools and photographs may have been kept in them. The soldier who owned this kit, whose name is not known, likely made it himself and decorated it with an American flag. He or his family likely preserved it as a souvenir of his service after he returned home. 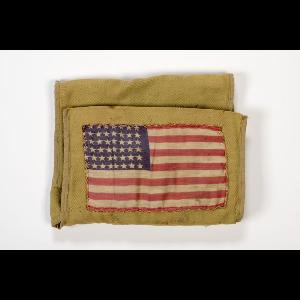 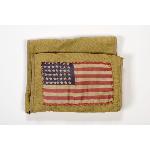 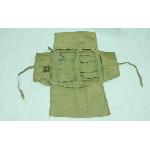