During World War I, families with a man serving overseas often displayed red and white banners in a window. On these banners a blue star let neighbors and passers-by know a family member was in the military. A silver star indicated that the soldier had been injured; a gold star showed that the soldier had died. The Kurzenknabe family of Harrisburg, Pennsylvania, hung this banner while their son, Charles (1888-1962), served in France as an Army musician. 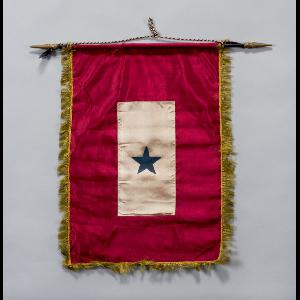