A series of five black and white photographs framed together showing the same man making motions as to conduct a band or orchestra. In three of the photographs, he holds a baton; in the other two he faces the camera and they show him from the chest up. The man has glasses and wears a white button-down shirt and gray pants. Three of the photos are marked with a copyright symbol and "1929 / Walter Dole." 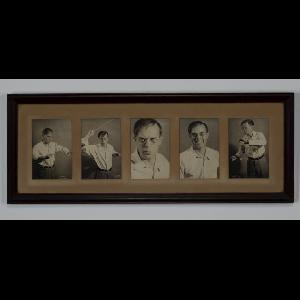