Black-and-white stereocard of eleven men meeting around a rectangular table. Each of the two men nearest to the viewer has his legs crossed. There are pads of paper and various containers on top of the table. Behind the table is a fireplace, with a mantle clock on top. The clock is flanked by a potted fern on each side, and has a framed portrait hanging above it. There is a chandelier above the table. Behind the men on the left side of the table, there is an open door. The photograph is mounted on a gray card. Printed on the front of the card is "T7 / * / Keystone View Company / Copyrighted / Manufacturers Publishers / Made In U.S.A. / Meadville, Pa., New York, N.Y., / Chicago, Ill., London, England. / 29472 T The President of the United States and His / Cabinet, Washington, D.C." Printed in black on the back is "29472 / PRESIDENT COOLIDGE AND HIS CAB- / INET, WASHINGTON, D.C.," followed by two paragraphs of text and the caption "Copyright Keystone View Company." The text on the back identifies the cabinet members in the photograph. 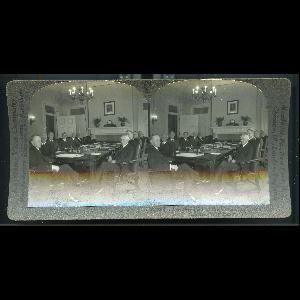 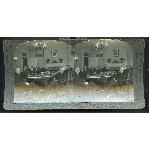 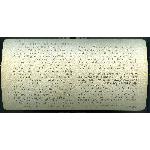