Caesar R. Blake (1886–1931) was a clerk with Norfolk and Southern Railway in Charlotte, North Carolina. He was a member of the Ancient Egyptian Arabic Order of the Nobles of the Mystic Shrine, Prince Hall Affiliated (A.E.A.O.N.M.S.), also known as the Prince Hall Shriners, founded in 1893 in Chicago, Illinois. Blake belonged to Rameses Temple No. 51 in Charlotte and served as Imperial Potentate, the head of the A.E.A.O.N.M.S., from 1919 until his death in 1931. The name of his temple and his title are embroidered on his fez. 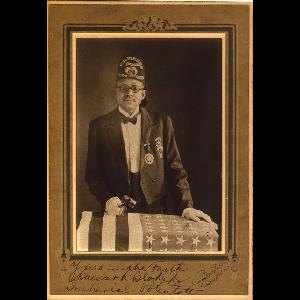