Not much is known about McFadden's display work with area department stores. Friends and neighbors recall he had something to do with The Enchanted Village, a fanciful recreation of a New England town shown annually at Jordan Marsh during the holiday season in the 1950s. This drawing suggests that McFadden drafted a proposal for a similar presentation at Filene's. Imagination and a love of making things shaped George McFadden’s life. During his long career, he designed sets and costumes for the theater and crafted jewelry. He also created mechanized displays for department stores and circus acts. In retirement McFadden developed a passion for clocks, especially cuckoo clocks. His neighbors and other clock enthusiasts brought him timepieces for repair. This paper mock-up shows an idea McFadden had for a sign to advertise his business. 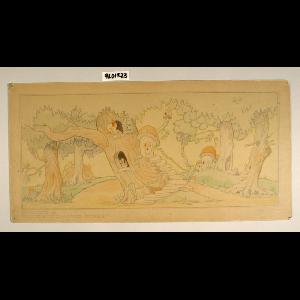