Sepia-tone photograph. Background shows several trees with a building at center (mostly hidden by a tree). Several people stand in the background in groups of two or three. The foreground shows a bus. Three young men in uniforms are seated on top of the bus. The one on the left leans on a bass drum. The drum has a three-link chain at top center and reads, "I.O.O.F. / Home Band / Elkins, W.VA." Standing in the street lined up in front of the bus are nineteen people (men, women and children/teens). The children wear dark uniforms and hold their instruments (trumpets, saxophones, trombones, etc.). Three additional band members lean out of windows in the bus. At lower right, the photographer's studio is indicated with a stamp, "Newlon Studio / Spencer, W.VA." 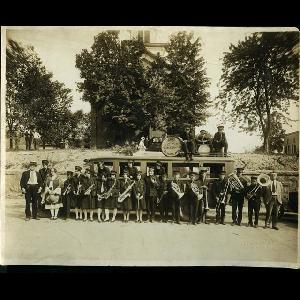