Sepia-tone photograph of two men, the one on the right is identifed as Ralph Schoenherr. Both men wear Masonic Shrine fezzes that read "Cyprus." Both wear jacket and tie with white shirt. The man on the left wears a white jacket and a dark tie; the man on the right wears a patterned gray coat and vest with a patterned tie. The man in white has his arm around the man in gray.

This photo depicts the donor's uncle, Ralph Harmon Schoenherr (1912-2002). Schoenherr was born in Schenectady, NY and became a fireman and an investment representative with Wright and Barnes in Schenectady. He was a Mason for over fifty years, as well as Royal Arch, Knights Templar, a Shriner and a member of the Royal Order of Jesters. He served as Potentate of Albany's Cyprus Shrine in 1959 and ran the Shrine circus for several years. Schoenherr was a member of the Albany Court Royal Order of Jesters and an affiliate of the Sarasota Court Royal Jesters. He died in Florida in 2002. 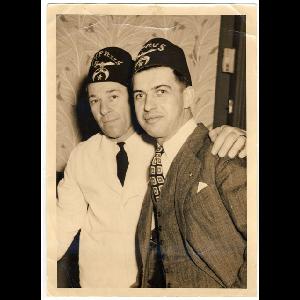