Black and white photograph showing parade float on street. Band follows the float and a crowd is gathered along the side of the parade route. The float is shaped like a large rock. A group of uniformed men on top is raising a flag - mimics the positions of the WWII soldiers who raised the flag on Iwo Jima. Applied to one side of the "rock" base is a shield with a central square and compasses symbol (has a G in the middle). 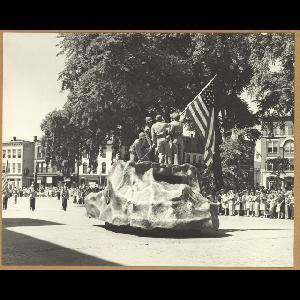