Black and white stereocard photograph of the Lexington Common [Massachusetts] - a large stone with carved wiriting is in the foreground, houses are in the background. The stone reads "Line of the Minute Men April 18 1775. Stand your ground. Don't fire unless fired upon. But if they mean to have war let it begin here. Captian Parker." On the left side of the image in black printed text reads "Keystone view Company, Manufacturers. Copyrighted. Made in the U.S.A. Publishers." On the right side are locations of the Keystone View Company. At bottom right beneath image, it reads "11680--Where the Revolutionary War Began, April 19, 1775--The Town Common, Lexington, MA." At the top center between the two images is the bolded number 1186. On back of card is a two column history of the Lexington Common. In pencil in upper right hand corner is number four cirlced, "2040" and "3 00." 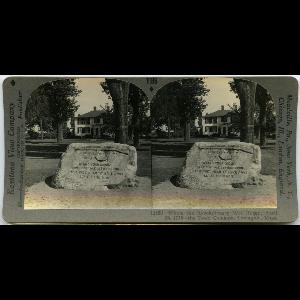