Emil Cruz in Masonic Knights Templar group. Black and white photograph of Emil Cruz with 11 other members of a Knights Templar group. Men stand in two rows, some on steps, and wear KT uniforms including hats with white plumes, shoulder boards (on some) badges, belts, and swords. In background, KT banner at PR side reading "IN HOC SIGNO VINCES" with passion cross below (as well as other text which is blocked from view); American flag to far PR; other flags to PL, and fronds of potted plants at either far side. On reverse, in top PR corner, handwritten in cursive in pencil, "Emil Cruz"; stamped in blue ink in center at an angle, "McNUTT PHOTO / 15010 Grand River / DETROIT 27, MICH".

This item belonged to Emil Cruz. Cruz (1904–1983), born in the Philippines, emigrated to the United States in 1924 at the age of 19 and eventually worked as a jeweler. He was a member of Schiller Lodge No. 263 and Damascus Commandery No. 42, both located in Detroit. 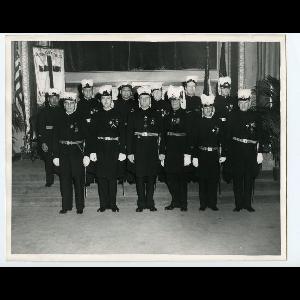 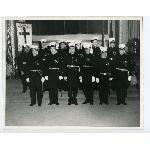 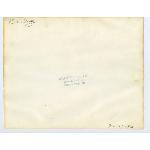