Pieced eight-point star quilt in white and multi colors. Nine 26" square blocks with 2" maroon sashing and muslin cornerstones. One outer border is approximately 2 inches wide. On two sides (and part of a third), the border is a floral print, one side is blue and white check and one side is a green and white print. Outer corners are a red print. Backed with more than 15 pieces of muslin. Back to front binding. Hand-pieced and hand-quilted at three stitches to the inch in parallel lines. Medium batting.

This quilt was made by members of the Freedom Quilting Bee, in Alabama, in the early 1960s. The donors, who lived in Alabama, purchased it around 1965. The Freedom Quilting Bee is a quilting cooperative established in 1966 near Selma, Alabama, as an outgrowth of the Civil Rights movement. Local women had a tradition of making quilts for themselves and their families and agreed to put a group of quilts up for auction in New York City to raise funds. The first auctions, in 1966, were so successful, that a market for the quilts was launched and the cooperative began selling them to interested buyers. 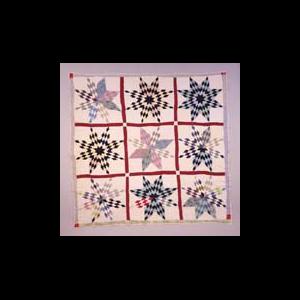