Masonic Shrine bobble head doll. Figure of a Shriner standing on a maroon oval base. The man wears a black coat and pants with a white shirt and black bowtie. he has brown hair and wears a maroon fez on his head; fez has a Shrine symbol at front center and a black tassel. The head is attached to a spring, allowing it to move around.

It seems fitting that a group known as "the playground of Freemasonry" would have its own bobble head doll. The doll depicts a member of the Masonic group, the Ancient Arabic Order of the Nobles of the Mystic Shrine, or Shriners. It may have been a souvenir from a specific Shrine event. Bobbleheads, also known as “nodders” or “bobbers,” seem to date back to at least 1842. In his short story, The Overcoat, published that year, Nikolai Gogol described a character as having a neck “like the neck of plaster cats which wag their heads.” In the 1920s, a New York Knicks basketball player bobblehead was produced and enjoyed some popularity, but it quickly waned. In the 1960s, sports figure bobbleheads came into vogue once again and since that time, innumerable popular figures have been immortalized with their head on a spring. 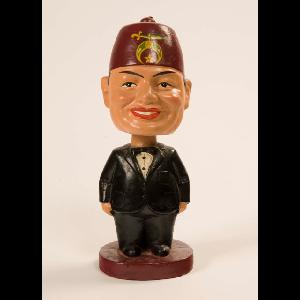 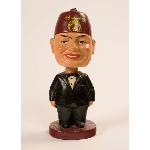 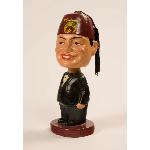