Masonic Past Master Apron, Emil Cruz, Worshipful Master. Square apron of synthetic leather and velvet (likely synthetic) has triangular flap and synthetic white fringe around body and flap. Wide dark blue border on body of apron has wavy vine-like pattern embroidered on it in white, with flowers at the corners central design of apron is an embroidered Past Master symbol, two crossing grape vine sprigs below, and false ties with white fringe to either side; dark blue border on flap is narrower, and there is an all-seeing eye embroidered at center of flap in blue, yellow, black, and gray. Top of apron trimmed with royal blue synthetic cord, which makes up ties which have tassels at ends. Printed in blue ink under flap: "PRESENTED BY / SCHILLER LODGE NO. 263 / F. & A. M. / DETROIT, MICH. / TO BROTHER / EMIL CRUZ / WORSHIPFUL MASTER 1970". Backing lined with dark blue satin (likely synthetic) and has white manufacturer's label sewn at bottom center with green embroidered text, "IHLING BROS. EVERARD CO. / UNIFORMS REGALIA / EQUIPMENT / KALAMAZOO, MICH."

This item belonged to Emil Cruz. Cruz (1904–1983), born in the Philippines, emigrated to the United States in 1924 at the age of 19 and eventually worked as a jeweler. He was a member of Schiller Lodge No. 263 and Damascus Commandery No. 42, both located in Detroit. 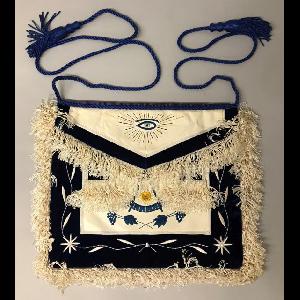 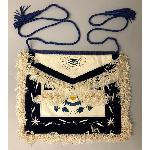 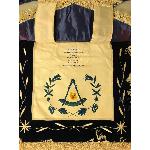 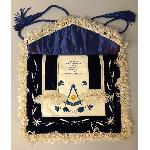 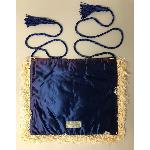 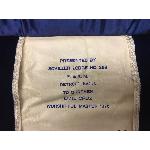