a: EXTERIOR: Masonic Shrine Aleppo Temple Past Potentate fez. Maroon felt body (likely wool) with black tassel. Shrine symbol at front center in gold and silver bullion studded with clear plastic "jewels", some colorless, others red and green. At center, Shrine emblem of scimitar above a tiger's claw with a five-point star in the center. A gold-tone Sphinx head is at the center of the tiger's claw. Above the symbol is gold bullion lettering studded with clear plastic "jewels" that reads, "ALEPPO". Below the symbol is gold bullion lettering studded with clear plastic "jewels," "PAST POTENTATE". The tassel emanating from top center of fez is held to its side by two curved black velvet bars decorated with colorless "jewels" on gold-tone surface; the upper one has a silver and gold scimitar over a tiger's claw, and the lower one is a gold bullion rectangle. a: INTERIOR: Along bottom edge is a brown leather sweatband. Stamped in silver lettering is "Made In Italy"; above this is a label for the maker, white with black lettering "D T & co. / 7 1/4 / D. Turin & Co., Florida". Opposite this, embroidered in yellow is "S. F. Maxwell". [A red plastic form is inserted inside the fez to hold its shape--removed 2/2020, ASM]. b: Round black case with hinged, zippered lid. Black handle at center on top. Maker's label inside the lid. Gray patterned lining. c: Brown rain cover for fez with elasticized edge. d: Red plastic fez insert to stiffen; circular top with 4 holes and center circular holes; 8 stiffeners

Shriners wear distinctive cone-shaped hats with tassels, called fezzes, at meetings and at public events. In a shape and style adopted from Middle Eastern dress, this fez features the name of the wearer’s group, or temple, on the front. This fez, which belonged to Stanley Fielding Maxwell (1910-1997), also features its owner’s title, Past Potentate. Maxwell was the Potentate, or leader, of Aleppo Shrine, in 1969. He also served as the Sovereign Grand Commander of the Northern Masonic Jurisdiction from 1975 through 1985. 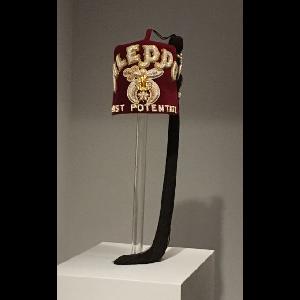