Black and white photograph of standing men in tuxedos wearing Masonic aprons. Twelve men stand in three rows wearing Masonic aprons with triangular flaps and Masonic cord jewels with symbols indicating their office. The first man in the front row wears the Masonic level of the Senior Warden. The man in the front center wearing a top hat wears the Masonic square of the Worshipful Master. The third man in the front row wears Masonic plumb of the Junior Warden. The man in the top right corner wears the crossed quills of the Secretary. The second man in the back row holds a baton. The Masonic "G", the symbol of the Order of the Eastern Star, and the symbol of the Order of the Amaranth are visible at the top. Embossed at the bottom right "Dayton Snyder / Stamford, Conn." Stamped in purple on the back "Dayton Snyder / Tel, / Stamford, Conn." 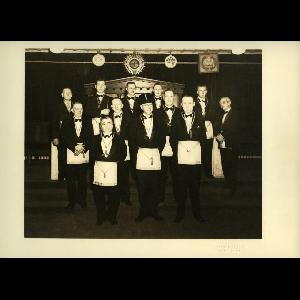