Oval-shaped Masonic Chapter medal with a hole drilled at center top. One side shows many Masonic symbols and has a banner at one side of the top that reads, "Simon House." The symbols include a sun and moon, a trowel, a square and compasses, a key, a sword, an open book, two columns, three candlestands, a checkered floor and Euclid's theorem, among others. The other side also shows several symbols including a beehive, an open book with square and compasses on top, a house, a pair of crossed bones, a coffin that reads, "Memento Mori", Jacob's ladder, and others.

For further information, see Newell, Aimee, et.al., "Curiosities of the Craft: Treasures from the Grand Lodge of Massachusetts Collection", 2013, p. 76-77. 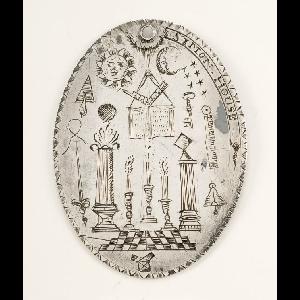 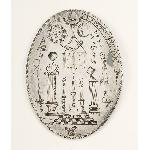 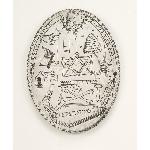