Transfer-printed creamware pitcher with gilding and a black band around handle, spout, base and rim. Overglaze colored decoration. One side shows colored print of uniformed fusilier [soldier] wearing a red coat and holding a flag. He stands on black and white pavement with Masonic symbols at top. Lettering around the print reads "Aut Vincere Aut Mori / Sucess to the Independent Boston Fusiliers, Incorporated July 4, 1787. America Forever." The reverse side shows three allegorical figues of Liberty, Justice and Truth (?) and reads: "United we Stand Divided We fall." Under the spout is a bald eagle with United States seal. On bottom is old label written in ink, "Capt. EA Proctor" with newer sticker reading "1705."

This pitcher is one of one hundred that Revolutionary War veteran Samuel Jenks ordered specially from England. He presented one to each member of the Independent Boston Fusiliers militia. The inscription around the oval frame reads, "Aut Vincere Aut Moi / Success to Independent Boston Fusiliers, Incorporated July 4, 1787. America Forever." The reverse is an engraving with three allegorical figures including Liberty and Justice, and the inscription, "United We Stand & Divided We Fall." Above this engraving and under the spout is a transfer design of the eagle from the United States seal. The Fusiliers' motto translates to "Either Conquer or Die." In 1794 the Boston Fusiliers led the Masonic procession to lay the cornerstone of the new Massachusetts State House. Samuel Jenks was initiated into the Masonic fraternity in 1760; he was a member of King Solomon's Lodge, in Charlestown, Massachusetts, from 1796. 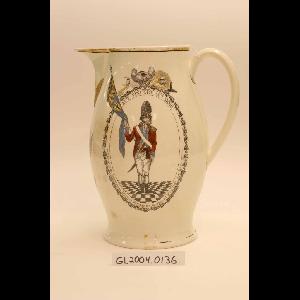 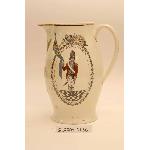 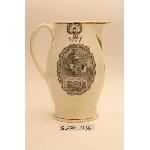 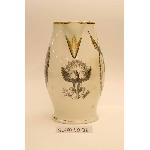 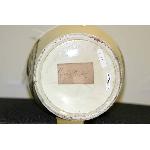 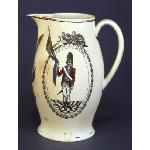