DeWitt Clinton, who served as Governor of New York in 1817, 1819, and 1826, joined New York’s Holland Lodge No.16 in 1790. He later served as Grand Master of the Grand Lodge of New York from 1806 to 1819. He also held leadership roles in the Grand Chapter of New York, and the General Grand Chapter of the United States. Clinton joined Cerneau’s Scottish Rite Supreme Council while he was serving as Lieutenant Governor of New York. His political enemy, Daniel Tompkins (1774-1825), was a member of the Bideaud Scottish Rite group, which received the 1813 charter from Emanuel De La Motta (1760-1821). In this work, Clinton's right hand rests on a square, compasses, and Bible, symbols that both represent and are fundamental to Freemasonry, underscoring Clinton’s identification with the organization. The details of the history and authorship of this painting are unclear. It was found near Albany, New York, in an elaborate frame ornamented with symbols associated with Royal Arch Freemasonry. It was likely displayed in a Masonic building in the mid-1800s. For further information, Burgess, Richard B., et al., "A Sublime Brotherhood: Two Hundred Years of Scottish Rite Freemasonry in the Northern Masonic Jurisdiction," 2013. 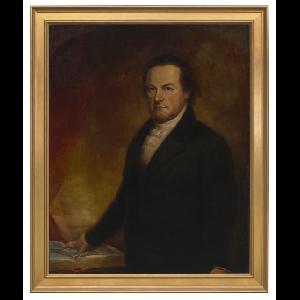