Black-and-white stereophotograph or stereocard mounted on a yellow card, showing a rock formation atop a mountain. The formation is rounded on one side, and planar on the other. On the right side of each image, in the foreground, there is a darker rock formation that is evidently closer to where the picture was taken from; its significance is unknown. Printed in black on the front of this card is "Watkins' Pacific Coast. / 429 Montgomery Street, San Francisco. / Entered According to Act of Congress, in the year 1867, by C.E. Watkins, / in the Clerk's Office of the District Court of the United States / for the Northern District of California. / Tasayac, or Half Dome, from Glacier Point. / 1153. / Yosemite Valley, Mariposa County, Cal." Handwritten in pencil on the back of the card is "FLS." 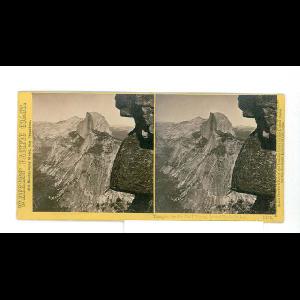