Black-and-white stereophotograph mounted on a yellow card, showing a landscape with several mountains. The peaks of the highest mountains are covered with snow. In the foreground, on the left side of each image, there are three trees. On the mountainside to the right of these trees, there are two waterfalls, one above the other. The upper waterfall is straighter and wider, whereas the lower waterfall is narrower and more winding. Printed in black on the front of this card is "Watkins' Pacific Coast. / 429 Montgomery Street, San Francisco. / Entered According to Act of Congress, in the year 1867, by C.E. Watkins, / in the Clerk's Office of the District Court of the United States / for the Northern District of California. / The Vernal and Nevada Fall, from Glacier Point. / 1155. / Yosemite Valley, Mariposa County, Cal." Handwritten in pencil on the back of the cars is "FLS." 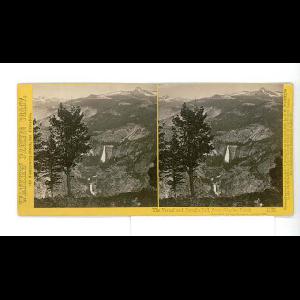