Black-and-white stereophotograph mounted on a yellow card, showing a waterway scene. Along the right bank of the waterway, there is a group of men standing in and alongside several barges. Some of the men are wearing hats. Further down the same bank of the waterway, there is a grove of deciduous trees. There are also several buildings further inland. In the middle of the water, there is a man poling a boat. There are some pencil markings near the top of the left image. Printed in black on the front of the image is "Photographed and Published by Kilburn Brothers, Littleton, N.H. / Entered, according to act of Congress, in the year 1873, by Kilburn Brothers, in the Office / of the Librarian of Congress, at Washington. / No. 1111. Canal near the City of Mexico." The back of the card is white, with an ornate green pattern covering all except the edges of the card. In the center of the back side, there is an ornate trademark with the letters "KB." Handwritten in pencil on the back of the card, probably by a child, is "ELIZB / ELI [illeg.] AZILE." 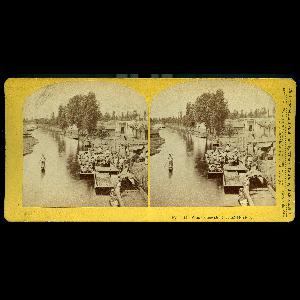 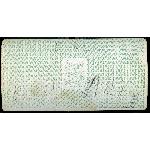