Clear pressed glass mug with handle on side. Flared rim. Decoration on body consists of three round sections. Two have fleur-de-lys motifs in the center. The other shows a bust profile portrait of a man. Lettering above the portrait reads, "Protection and Prosperity." Lettering below reads, "Maj. Wm. McKinley." Commemorative for William McKinley (1843-1901). 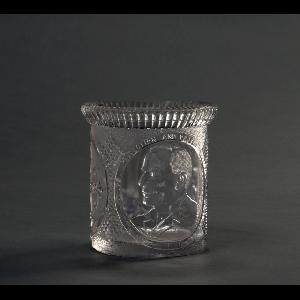