Black and white stereocard photograph with images of a group of people (Freemasons) with the Acropolis in Athens, Greece. On the left side in gold type reads "H.C. White Co., Gen'l Offices N. Bennington, Vt., U.S.A. Branch offices: New York, Chicago, London" and on the right in gold type, it reads "The "Artisque Coleur" Stereograph. Patented April 14, 1903. Other Patents Pending." At the bottom right corner, in a white rectangular stripe, it reads "Masons in the Acropolis, Athens." The back is blank, with pencil at the top right with a circled 4 and "25 00." 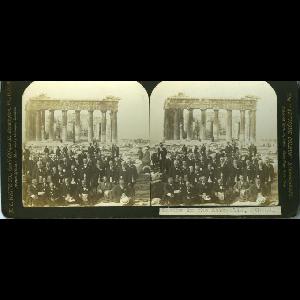