Black and white photograph of Masonic lodge interior; photograph depicts degree team. Men assembled in three rows; first two rows sit in costume. Lodge officers stand in the third row wearing evening dress, they are flanked by four men in costume; two officers in the center hold an American flag. Room interior is bare with an altar or shrine behind the men; altar has a star (Order of the Eastern Star emblem) on top. An upper case "G" is suspended from the ceiling.

Although initiates are blindfolded throughout the ritual degrees, some lodges choose to perform the ritual work in full costume to heighten the drama and make the performance more entertaining for the attending brothers. Lodge officers are shown here in evening wear, while the cast wears costumes. 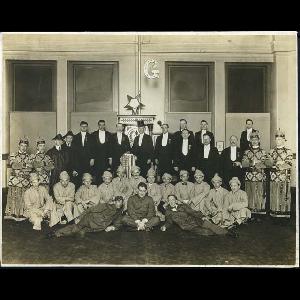