Independent United Order of Mechanics fraternal apron with square body and no flap. The center section is white with an IUOM scene printed in black. It has a central shield divided into six sections, each with a symbol (lamb, five-point star, square and compasses, crossed keys, ark and one other building tool). At the center of the top four sections is a heart and hand symbol. Flanking the central shield are two men, each leaning on a sword. At the feet of each man is a globe. An archway above the shield is supported by two columns on the sides. The archway reads, "In God is Our Trust." At the center of the arch is an hourglass surrounded by the words, "Let Brotherly Love Continue." At top center is an all-seeing eye. Below this is the sun, the moon with seven stars, an ark, a dove and the letters "T U C." Below the men is a banner reading, "Peace Love Unity Concord Truth Charity." At bottom center is a coffin with a skull resting on top. The center panel is surrounded by several borders: gold trim, bright pink silk, different gold trim and green silk. The sides and bottom of the apron have an applied gold bullion fringe. The top edge has a green silk border with knife-edge binding to the back. The apron is backed with white cotton. Stitched at the corners are light brown elasticized "ties" that end in a silver-tone clasp. One side of the clasp reads, "Gem / Golf / Garter."

The Independent United Order of Mechanics was founded in England in 1757, growing out of a Masonic schism. It was established in the US in 1910; a Grand Council was formed in New York. It is a Friendly Society with the motto, "Friendship, Truth and Love." The group's aim is to "practice and promote justice, philanthropy, charity and benevolence." It is a fraternity for African-Americans. The apron belonged to Torrance Ashby (1897-1966) of Cambridge. He was a member of IUOM's Star of Cambridge Lodge. 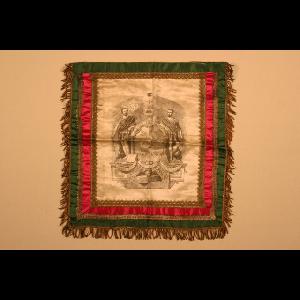 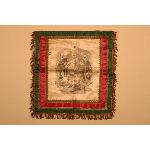 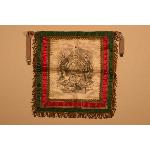