Painting of an Arabian knight (wearing a white head scarf and a yellow robe) on a white horse; signed "Falls." The horse rears up on its back legs. Colored background in black, orange and green.

Charles Buckles Falls (1874-1960), a commercial artist, painted this work, which was used for the cover of the February 1927 issue of The Shrine Magazine. Known as "the playground of Masonry," the Shrine is a Masonic group that was formed in 1872. The group drew on Middle Eastern fashions and culture when designing their regalia and rituals. Magazine editors shaped The Shrine Magazine to appeal to not only male Shrine members, but also to their families with short stories, a women's department and general interest articles. 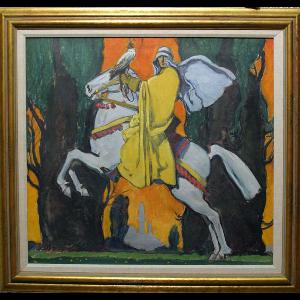