Black and white photograph of six men walking down the boardwalk in Atlantic City, New Jersey. The men are Freemasons and members of Azure Lodge. The four men on the left wear overcoats, while the two on the right wear three-piece suits. The men with overcoats also wear suits. Three of the men wear hats. Each man is carrying a box or case with his Masonic apron. In white below the second man on the left is "52." Stamped on the back in blue is the photographer's name, "Central Studios / 15 S. Virginia Ave. / Atlantic City, N.J."

The man above the "52" is the donor's father, Cecil Collins, who was Master of Azure Lodge in 1952. The man to his right with his coat open is Harold "Pappy" Hansen. Cecil Collins was born on November 23, 1900 in Dunmore, PA. He studied carpentry at the Williamson Trade School outside of Philadelphia. He married Eliza Cramer in 1924 and the couple had two daughters. During the Depression, he found a job at the General Motors Plant in Linden, NJ. He started in the Maintenance Department and rose to Superintendent. He died in 1979. A photographer captured these members of Azure Lodge in Atlantic City, New Jersey, walking on the boardwalk on their way to a meeting. In preparation for the meeting, they wear suits and ties. Many of the men pictured carry their aprons in protective cases tucked in a pocket or under their arms. “The Badge of a Freemason: Masonic Aprons from the Collection,” March 2016-March 2017 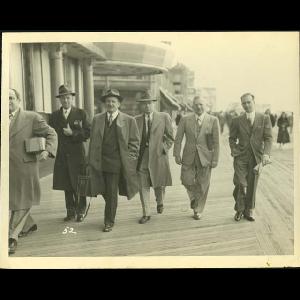