Caricature of a Freemason with sun as face, level as neck, squares as arms, Bible as chest, pillars as legs; wearing apron standing on checkered pavement with ornate floral boarder; caption within reads: "A Free Mason / Form'd out of the Materials of his Lodge / Behold a Master Mason rare, / Whose mistic Portrait does declare, / The secrets of FreeMasonry / Fair for all to read and see; / But few there are to whom they're known / Tho they plainly here are shown." At bottom reads: "A. Slate delin. / Published according to Act of Parliment August 15th 1754, By W. Tringham No. 36, Hosier Lane, West Smithfield / Price 6d, coloured 1 shilling."

Freemasonry relies on a series of symbols to teach initiates its lessons and values. This engraving employs many of the most common Masonic symbols to depict a member Mason. Putting the symbols together visually like this to form a bigger picture also helps the Mason reflect on the connection between the values symbolized. In the 1700s Americans who sought to depict Masonic symbols often relied on English models for their own work. An English engraver, A. Slade, cleverly formed this figure of a Mason out of Masonic symbols. The fanciful Freemason wears a plain apron, much like the kind a workman might have used. The hole at the center of the apron flap would have allowed the wearer to secure the apron to a coat button. This attachment would have helped keep clothing free from dust or debris. For further information, see Newell, Aimee, et.al., "Curiosities of the Craft: Treasures from the Grand Lodge of Massachusetts Collection", 2013, p. 72-73; Burgess, Richard B., et al., "A Sublime Brotherhood: Two Hundred Years of Scottish Rite Freemasonry in the Northern Masonic Jurisdiction," 2013, p. 24; and blog post, November 30, 2016 http://nationalheritagemuseum.typepad.com/library_and_archives/2016/11/new-to-the-collection-a-free-mason-composed-of-the-materials-of-his-lodge.html 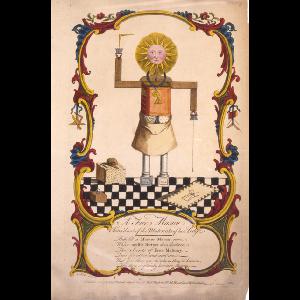 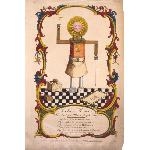 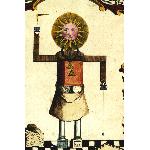