The 1880 election brought out few major issues, but did see high voter turnout. Republican James A. Garfield (1831-1881) and his running mate Chester A. Arthur (1829-1886) won by less than 10,000 votes over Democrats Winfield S. Hancock (1824-1886) and William H. English (1822-1896). The lithographer made textiles in this style and colorway for the candidates of both parties. The symbols around the portraits differ on each in order to highlight notable characteristics for the respective candidates. On this one, a canal boat and a combination sail and steamship suggest Garfield's interest in promoting trade. Sadly, Garfield was assassinated just a few months after his victory. 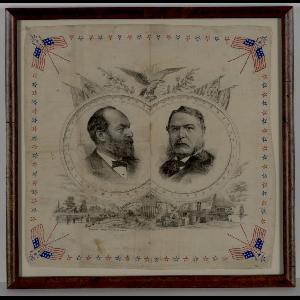