Portrait of man in Masonic Knights Templar uniform. Three-quarter length portrait of the subject standing. He wears a black chapeau-de-bras [hat] with white plume, black uniform with triangular apron, sash, and gauntlet style gloves. Pinned to his chest are several Masonic badges including ones from the Shrine and the Scottish Rite. One hand rests on his sword at his waist. Plain brown background. Signed at lower left, "A Edmonds / NY 1893." Written in green on top stretcher on back, "Edmonds."

An appendant Masonic group known for its martially-inspired uniforms, the Knights Templar developed costumes adorned with surplus military trimmings after the Civil War. The unidentified subject of this portrait wears regalia associated with the Knights Templar. In addition, jewels and badges related to other Masonic groups, such as the Shrine and the Scottish Rite, ornament his coat. Clearly, the subject of this work took pride in his involvement with Freemasonry. Although the history of this work is not known, its size and carefully portrayed details suggest the painting may have been commissioned to hang in a Masonic building. The degree of detail and shading of this portrait suggest it may have been painted from a photograph. For further information, Hamilton, John D., "Material Culture of the American Freemasons," 1994, pp. 115, 271. 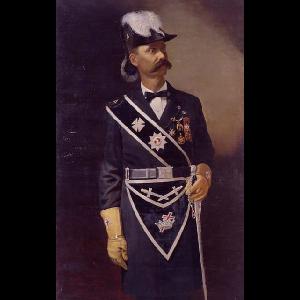