William Henry Anderson (1828–1907) worked as a carriage manufacturer and lived in Waltham, Massachusetts. Anderson received his degrees at Monitor Lodge, in Waltham, in 1860. In this portrait, he wears a Past Master’s jewel given to him by Monitor Lodge. Anderson served as the Master of his lodge from 1884 to 1885. 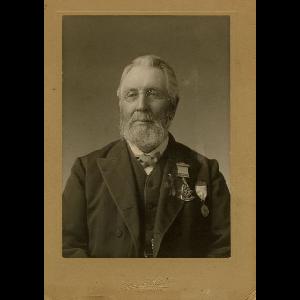