Emil Cruz and Companion, Yoshiko. Color photograph of Emil Cruz standing with a woman (identified on back as Yoshiko) in kimono while he is in his Master's apron, collar, and jewel, with a white flower in his lapel, holding a gavel. In background are several chairs, fireplace, and decorative molding on walls; carpet on floor with geometric pattern. Hand-written cursive inscription in blue ink on reverse: "Kent (possibly) & Pat & [illeg name] / For Your Family / with Love / Dad & Yoshiko"; to PL of inscription, stamped in black ink: "Pherlo Photo / 11407 LAUDER AVE. / DETROIT, MICH. 48227 / PHONE 83[illeg.]". Printed lightly in gray, repeating diagonal lines across back of photo paper, "A KODAK PAPER".

Emil Cruz (1904–1983), born in the Philippines, immigrated to the United States in 1924. A member of Schiller Lodge No. 263 and Damascus Commandery No. 42, both located in Detroit, Michigan, Cruz worked as a jeweler. This photograph commemorates his installation as Master of his lodge. In this photograph, he wears a top hat and holds a gavel—both symbols of his authority. His jewel is in the shape a square, a Masonic symbol of honesty and fairness, as well as the age-old emblem of a lodge Master. 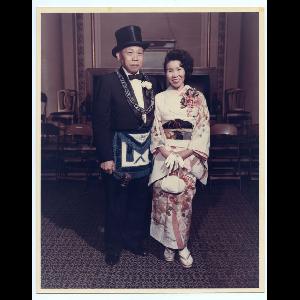 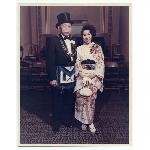 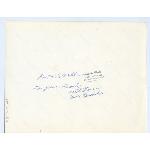