Black and white studio photograph of Ralph Schoenherr wearing his Masonic Shrine fez. The fez reads, "Cyprus / Potentate." He also wears a black coat, white shirt and black bowtie. Around his neck is a Shrine jewel with tiger's claw. He has a Shrine pin in one lapel and a white handkerchief peeking out of his jacket breast pocket. The photo is mounted in a blue cardboard holder. Stamped in black at the lower right corner of the holder, by the photo, is "Proctor."

Ralph Harmon Schoenherr (1912-2002), pictured here, was born in Schenectady, New York. A Mason for over fifty years, he was also involved with the Royal Arch, was a Knight Templar, and a Shriner. He served as Potentate of Albany's Cyprus Shrine in 1959 and ran the Shrine circus for several years. Schoenherr was a member of the Albany Court Royal Order of Jesters and an affiliate of the Sarasota Court Royal Jesters. 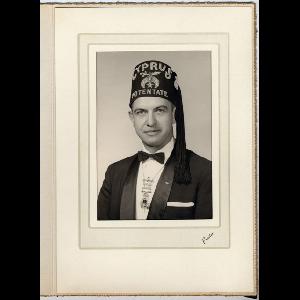